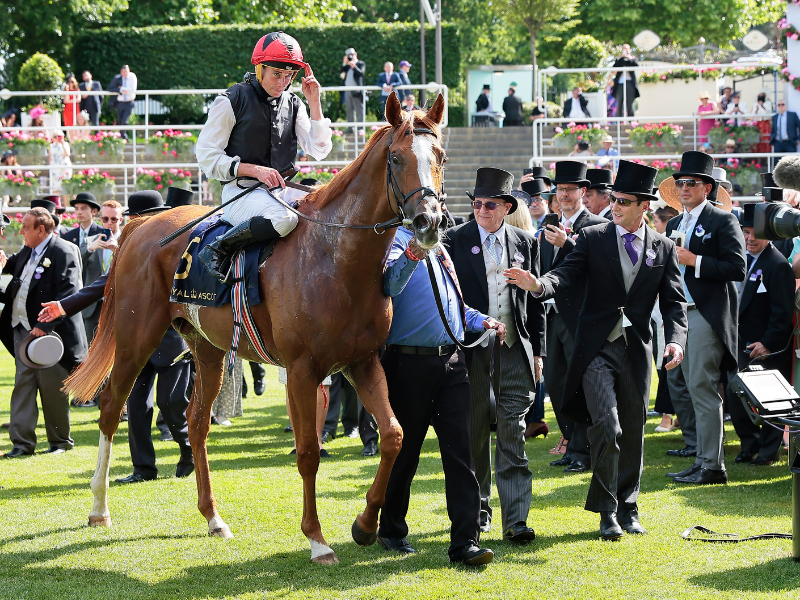 Irish racing and breeding can reflect with pride on a stellar week of racing at Royal Ascot. Irish-breds won 17 of the 35 races. There were eight Irish-trained winners in total, five of those for Aidan O’Brien, with one apiece for Joseph O’Brien, Jessica Harrington and Willie Mullins. 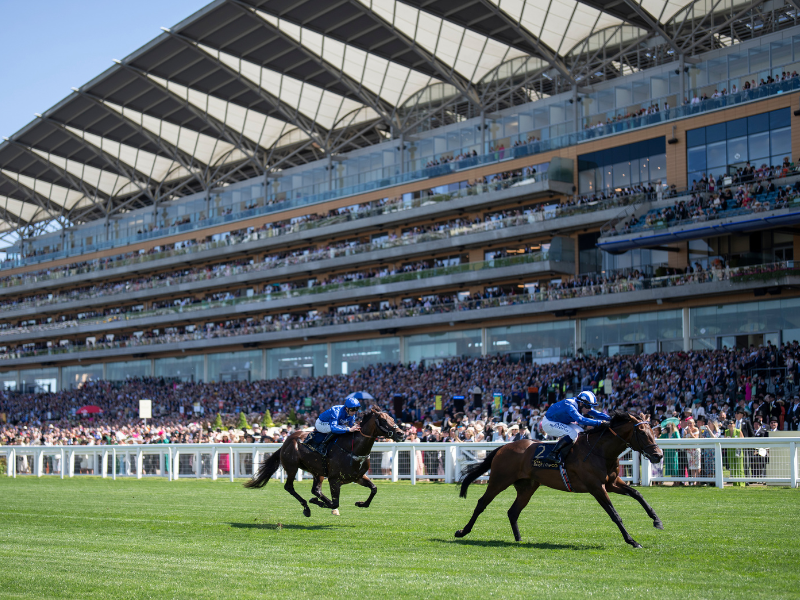 TUESDAY 14 JUNE 2022
The traditional opener of the Royal meeting, the G1 Queen Anne Stakes down the straight mile, witnessed BAAEED cementing his status as the world’s highest-rated thoroughbred with a ready dismissal of six rivals. The margin to Real World was a length and three-quarters, half the gap back to the same rival in the Lockinge a month earlier, but jockey Jim Crowley’s hands-and-heels urgings were more than enough to keep a perfect 8-8 record intact.

BAAEED is by the mighty Sea The Stars (IRE) who stands at Gilltown Stud in County Kildare and his full brother Hukum (IRE) won the G1 Coronation Cup 11 days earlier at Epsom.

Three Irish-foaled winners saluted on the day, led by Godolphin’s 2,000 Guineas hero COROEBUS (IRE) in the G1 St James’s Palace Stakes. Next in line was COLTRANE (IRE) who displayed no small amount of courage to land the Ascot Stakes over 2m4f. He was bred at Rockfield Farm in County Cork and his sire is the late Mastercraftsman (IRE), formerly of Coolmore.

A good day for Godolphin was capped when one of their Darley Stallions, Teofilo (IRE) at Kildangan Stud in County Kildare, sired GET SHIRTY (IRE) who landed the Copper Horse Handicap. 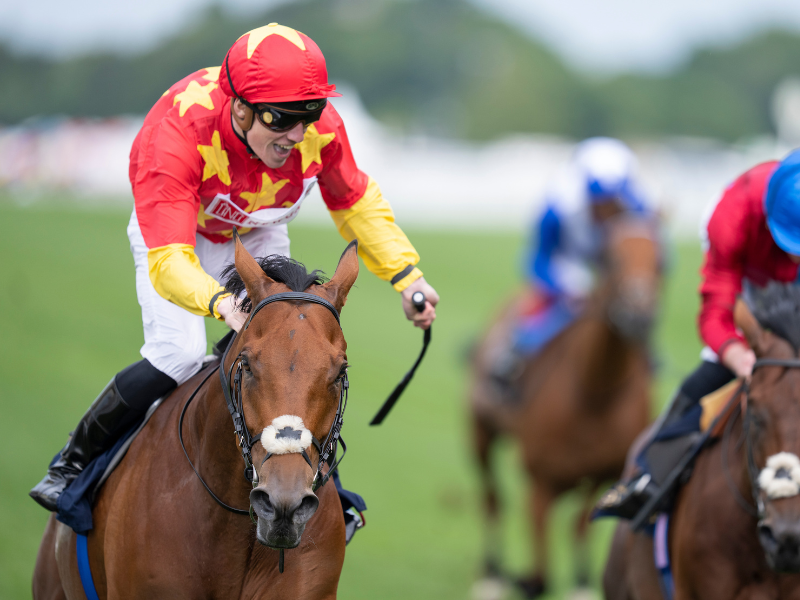 WEDNESDAY 15 JUNE 2022
Success, it is said, has many fathers and so it proved as an international cast of owners gleefully received STATE OF REST (IRE) after he made every yard of the G1 Prince Of Wales’s Stakes, the feature of the Wednesday card at Royal Ascot.

Joseph O’Brien’s rock-hard colt was recording his fourth major title on three continents in under a year after G1 triumphs in the Saratoga Derby in the USA, the Cox Plate in Australia and the Prix Ganay in France.

After the success in Melbourne, his colours changed to that of China Horse Club, while Newgate Stud in Australia and Rathbarry Stud in County Cork snapped up his breeding rights when his glorious career on the track ends.

STATE OF REST was bred in County Laois by Dermot Cantillon and Meta Osborne’s Tinnakill House operation and is sired by Coolmore’s Starspangledbanner. His dam Repose, who also produced this season’s G3 winner Tranquil Lady, switched to Juddmonte in a private deal last month.

LITTLE BIG BEAR (IRE) rewarded strong market support in the Listed Windsor Castle Stakes and displayed a good deal of tenacity in doing so. Aidan O’Brien’s juvenile was drawn on the far side and still had quite some work to do approaching the furlong marker, but gradually whittled away at the lead of Rocket Rodney to score by a neck. He was sired by No Nay Never at Coolmore Stud and was bred by Timmy Hyde at Camas Park Stud & Summerhill.

Bahrain continues to make huge strides on the international stage and Prince Khalid bin Hamad al Khalifa of KHK Racing welcomed his first winner at the meeting when ELDAR ELDAROV gained the verdict after the tightest of photo finishes with Zechariah (IRE) in the G2 Queen’s Vase. He first surfaced at the Goffs Orby Sale when it was staged at Doncaster in 2020 and required £110,000 for Mags O’Toole and Norman Williamson’s Oak Tree Farm to secure him.

Four of the seven winners on the day were foaled in Ireland, commencing with the G2 Queen Mary Stakes winner DRAMATIZED (IRE) for owner Steve Parkin’s Branton Court Stud. A superb day for China Horse Club supremo Teo Ah King was capped when SAFFRON BEACH (IRE) proved much too good in the G2 Duke Of Cambridge Stakes. She is by New Bay (IRE) of Ballylinch Stud in County Kilkenny.

THURSDAY 16 JUNE 2022
It is almost a year since the death of Galileo (IRE), but how his influence lives on. The late stallion supplied a double on Ladies Day headed by KYPRIOS (IRE) in the G1 Gold Cup for trainer Aidan O’Brien in the colours of joint-owner and breeders Moyglare Stud.

It was quite the achievement: a horse with only six prior starts reaching the pinnacle of the staying division and how about Moyglare’s sensational mare Polished Gem (IRE), producing yet another G1 winner to follow in the hoofprints of her other luminaries Free Eagle (IRE), Search For A Song (IRE) and Sapphire (IRE).

Galileo’s other winner on Thursday came via MAGICAL LAGOON (IRE), who clawed back a deficit inside the final furlong of the G2 Ribblesdale Stakes to get owner Zhang Yuesheng, trainer Jessica Harrington and jockey Shane Foley on the scoresheet. This filly was bred by Coolmore and was first sighted in public in an Irish EBF Barrier Trial in late June last year.

The question as to whether Royal Ascot winners can be sourced on a budget was answered in the affirmative in the G3 Hampton Court Stakes when CLAYMORE, a £10,000 purchase at the Tattersalls Ireland Goresbridge Breeze-Up 2021, took the spoils. He was consigned by Mary Reynolds of Ardglas Stables in County Tipperary. 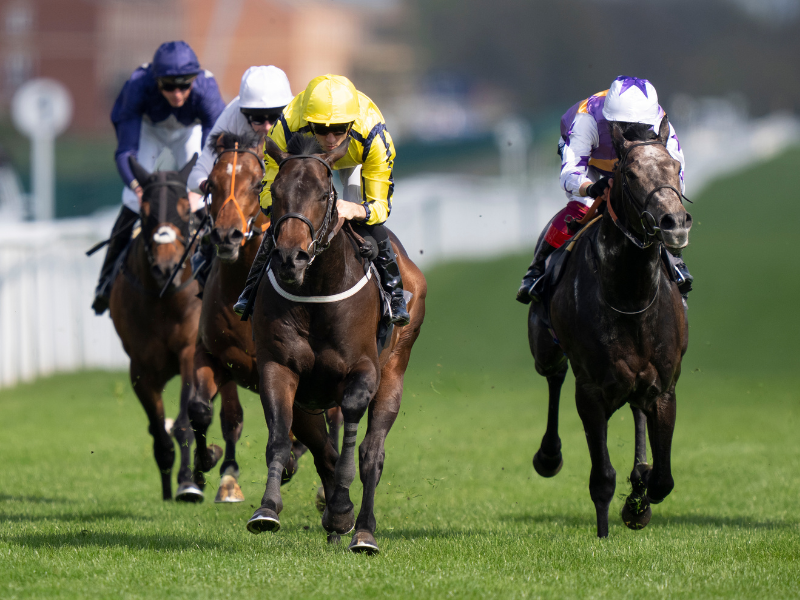 FRIDAY 17 JUNE 2022
Aidan O’Brien saddled a double on the Friday, commencing with MEDITATE (IRE) in the G3 Albany Stakes for juvenile fillies over 6f. The daughter of No Nay Never was preserving a perfect 3-3 record.

CHANGINGOFTHEGUARD (IRE), a third winner of the week for Galileo (IRE), backed up from his fifth-placed effort in the Derby less than two weeks prior when he responded to considerable pressure to edge a thrilling climax to the G2 King Edward VII Stakes.

County Westmeath sales and breeding powerhouse Tally-Ho Stud enjoyed a terrific result when their homebred PERFECT POWER (IRE) collected his third career G1 in the Commonwealth Cup. The focus then shifted to Barnane Stud, the County Tipperary operation owned by the Kieswetter family from South Africa, whose CANDLEFORD (IRE) bolted up by six lengths in the Duke Of Edinburgh Stakes.

Both Dark Angel (IRE) and Starspangledbanner (AUS) supplied their second winners of the week when HEREDIA and LATIN LOVER (IRE) obliged in the Sandringham Stakes and the Palace Of Holyrood Stakes respectively.

SATURDAY 18 JUNE 2022
BROOME (IRE) can lay claim to being one of the best and toughest horses in training after he made all in the G2 Hardwicke Stakes, his first win since incurring a fracture to his cannon bone in an accident after the Japan Cup late last year. The six-year-old son of Australia was bred by Epona Bloodstock and was offered at the Goffs Orby Sale. He has now won seven stakes races.

ROHAAN (IRE) became a remarkable repeat winner of the Wokingham Handicap, rediscovering the winner’s enclosure for the first time since he won the same race a year earlier. Bred by Liam Phelan at Glashare House Stud in County Kilkenny, the four-year-old was offered at Goffs November Foals in 2018.

Willie Mullins made sure he did not leave emptyhanded when STRATUM (IRE) was another repeat winner in the Queen Alexandra Stakes, the longest race of the Flat season over an extended 2m5f.